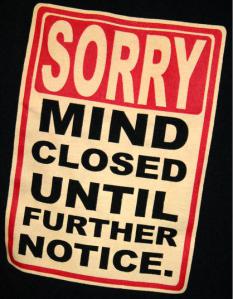 It was a post regarding prostitution.  I am of the belief that legalization and control of such business as prostitution and drugs would be beneficial in reducing organized crime and bringing those who have been sucked into drug use or prostitution more opportunity to find the connections they need so they can escape the destruction that can come from being involved in these areas.

So, I was surprised that no one was responding to my criticism of the post.  I went back today and found that my post had been edited and the blog owner and a follower or two were posting slanderous comments directed at me, accusing me of claiming I had  solicited a prostitute.

This sort of behaviour seems to be common of those who have closed themselves off into a group that only supports one way of thinking.

I’ve seen the same sort of message-control utilized several times.  Politics is ripe with it, and some religious-based viewpoints seem to breed it as well.

Typically, this behaviour accompanies flawed viewpoints where the followers of such viewpoints don’t want to have their community bubble burst.  I think it could even be considered a form of tribalism.

Nonetheless, beware of those communities that engage with these tactics.  If you value finding the truth of matters, criticism and questioning are very important.